After enjoying a relaxing day in Strasbourg, it was time to switch hiking teams. Tania was leaving and my brother Tristan and my dad’s cousin and her husband (though they feel like way closer family) Loek and Marina, were joining.

We started early in the morning. The route wasn’t too long, but first we had to get out of the industrial area. This was easier than expected. We then followed the Rhine for quite some time. It was beautiful. Loads of swans. Every now and then a ship would pass. And just the sheer joy of being out in nature along the water, made us all happy. We had some great conversations. There were many benches, so we could enjoy the view. But that were the most elaborate resting stops we had, which meant loads of bush peeing.

After following the Rhine for most of the day, we had to head into the forest for the last bit. It was cooler than walking in the burning sun, so that was a win. Rheinau was a tiny place, but luckily with a small guesthouse where Tristan and I could stay. Loek and Marina were going back home. We enjoyed an icecream and it was already time to say goodbye. 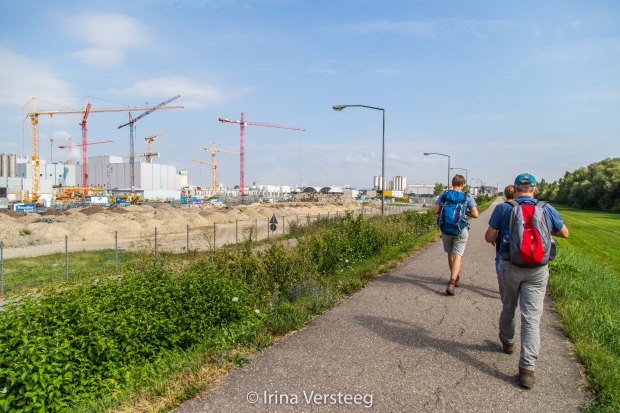 Trying to get out of the industrial area.

Break on a bench at the Rhine river 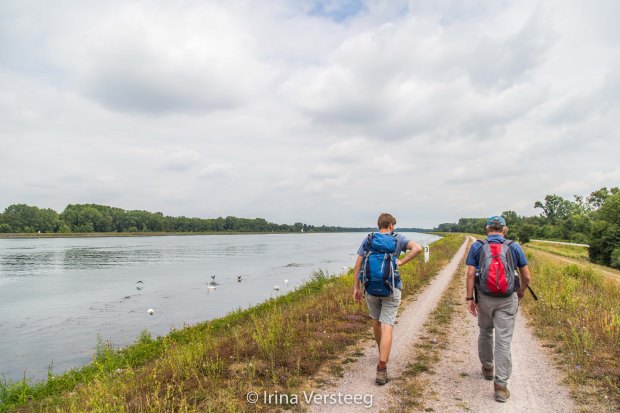 We saw many swans

Another break on a bench along the Rhine river

Another type of break.

Getting into a foresty area

The next day Tristan decided we wouldn’t be walking on the Rhine, but instead would be heading into the hills. Which meant more interesting hikes and (bonus!) wine from the region. So we decided to head to Bühl. Not completely in the hills yet, but it was one the way. We had a relaxing day through the corn fields. We saw a lot of deer. Some we could hear very near in the corn fields, running past us. We had a lunchbreak in a very German place with plastic chairs and half liter beers that were cheaper than water. And then we continued to Bühl, where we slept at a monastery!

Spotting deer in the corn field.

Do you see the deer in the distance?

Such a corny photo 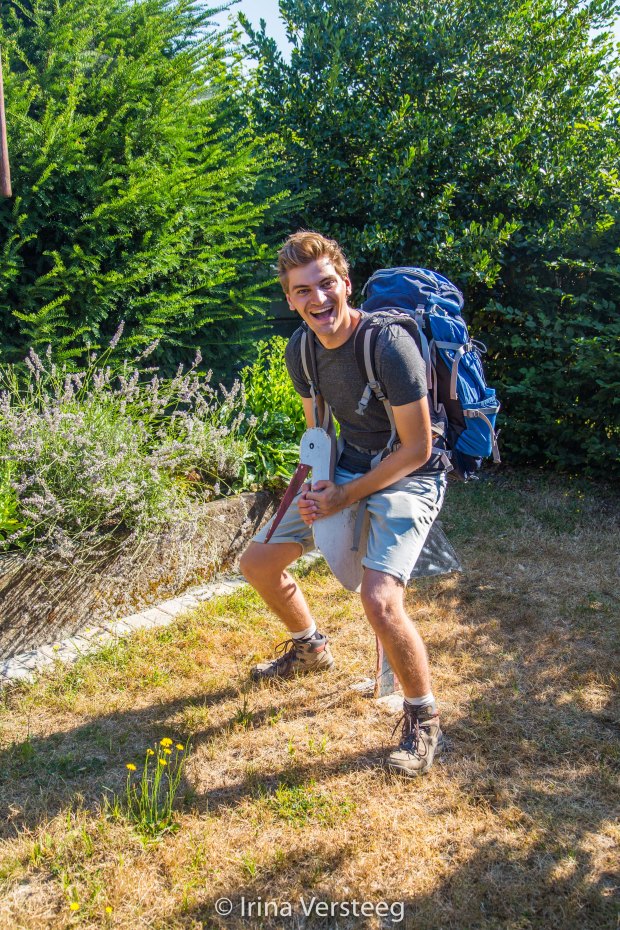 Even though we’ve left the Alsace region, the storks are still everywhere. 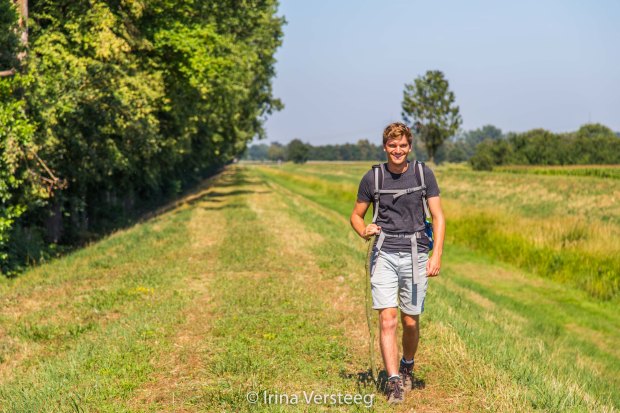 Ah, what a cute-pie is my little brother. That smile is going to break many hearts.

Tristan trying to feed the cows (and a huge bull). They wouldn’t have any of it.

Drinking beers at this very German place (we’re just having tiny beers. Yes, this is the tiny size.) 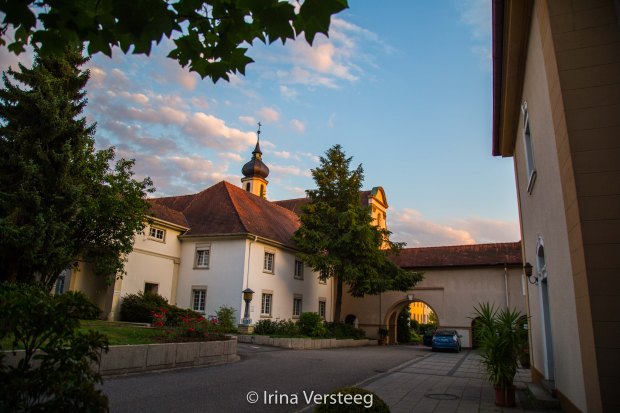 Sleeping at the monastery of Bühl.

Then it was already our last day together again. And a special day as well. 14th of July was the birthday of our Mother, who died almost 5 years ago. She always taught us to follow our hearts, don’t have any regrets and take out of life what you can. So we decided to celebrate this special day with drinking wine. We found two wine castles on Google Maps that were on our way to Baden Baden. So in the early morning we started hiking through the wine fields over the rolling hills. We chatted with some elderly German men. After about two hours we got to Weingut Schloss Neuweier, where we tasted wine, and since we couldn’t really carry bottles, we decided to buy a bottle to drink there at the castle. Mind you, this was still in the morning. Out of pure luck a photographer came by to take our photo. And then the wine castle boss came out with two friends and we drank even more. We weren’t even half way…

Eventually we decided to walk on. Which was kind of a difficult decision, because the friends of the wine castle boss offered us a ride to Baden Baden and told us there was an oldtimer meeting over there. So we wouldn’t be bored. Somehow, we decided that walking was the better option, and in hindsight it might have been so. We had another great hike up a hill, through a forest, before making it down the hill to the center of Baden Baden. We skipped the second wine castle. In Baden Baden we saw all the oldtimers and drank expensive sodas.

Hiking through the wine fields. 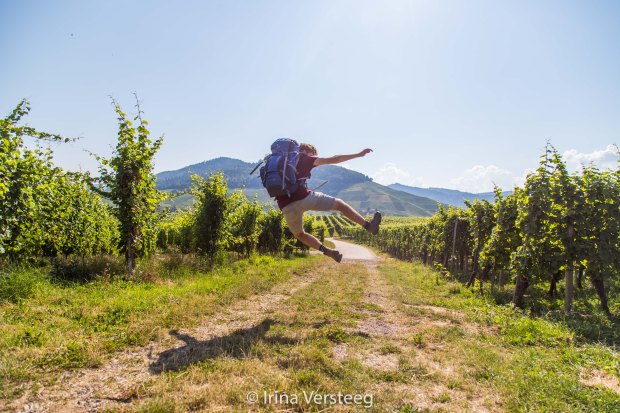 Jumping through the wine fields. 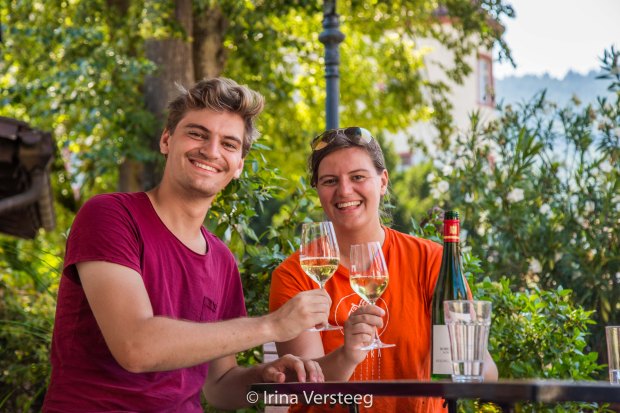 Finishing the bottle in the garden of the castle 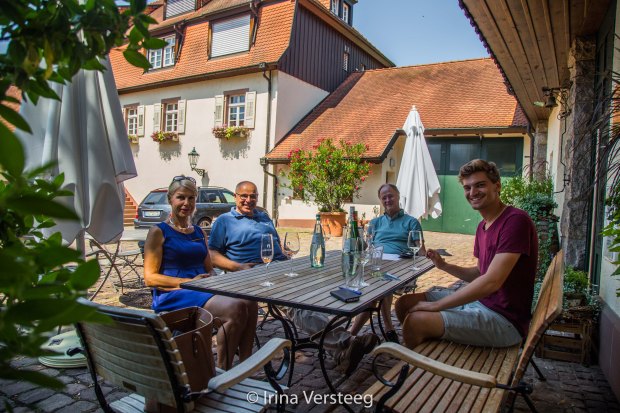 And then finishing even more wine with the wine castle boss and his friends. 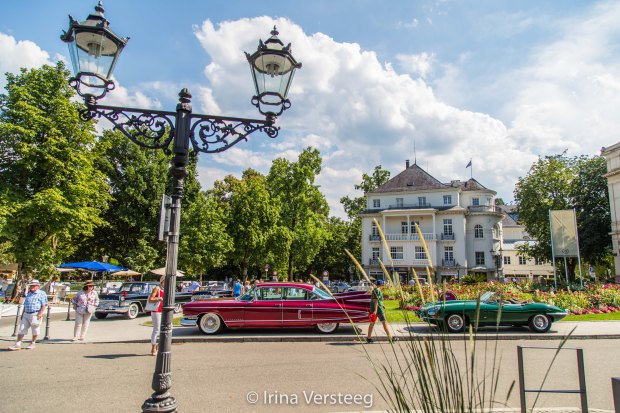 Then it was off to Karlsruhe and Tristan was already leaving again. Karlsruhe was an interesting city. Looked pretty new and has a weird pattern of streets all build like radials from the Castle in the center. We had one of the best burgers we ever had and then Tristan got back on the bus. Tomorrow new team member Caroline is coming! 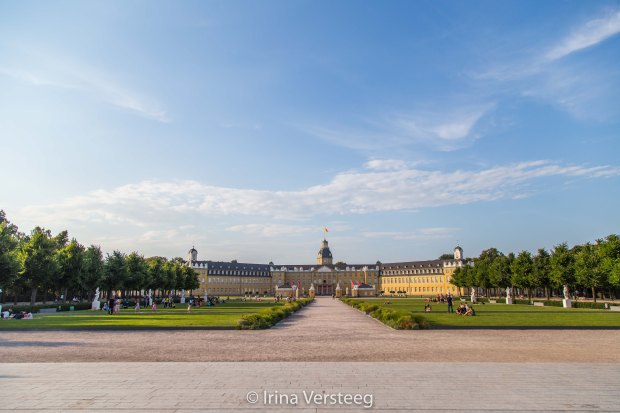