In ancient Roman times, people needed to relax sometimes as well. Escape the hectic everyday life of Rome. They needed like a holiday park. And they built one, well… several actually. But one of them is Alba Fucens.

Avezzano (about 100kms East of Rome) used to be based at the edge of a big mountain lake. The lake is gone now, but has appealed to people for a long time. And as much as we like a holiday at the lake now, Romans liked a holiday at the lake, too. There is a small hill looking over Avezzano, with a plateau, Lion-King-style. And on that hill there used to be a large Roman city. Alba Fucens.

Today the excavations are still taking place. But they have already surfaced the center of the city including a nearly intact amphitheater. A large city wall that used to surround the center is still visible in some places. 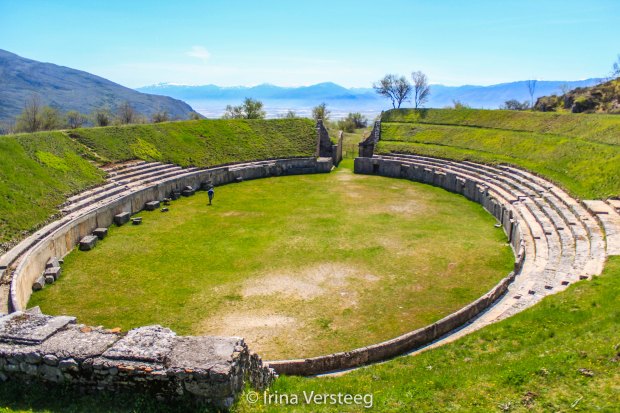 The Roman amphitheater of Alba Fucens.

At the Roman excavation site of Alba Fucens. An old holiday resort for the ancient Romans.

The best thing about Alba Fucens is that it is not very famous and the entrance is free. You therefore have the liberty to dwell around, on your own, pretending what life must have been in the old days. In the mean time you can look down at the valley where Avezzano is situated and you are safely surrounded by mountains, by the time I was there they were still covered with snow. Beautiful.