The Northern coast of the Peloponnese, I have almost seen it all. The sad thing is; it won’t exist for a long time any more. At least not the coastline I’ve seen.

A man in Korinthos told me, when I was looking at the miserable little part of beach at Korinthos that was left, that the sea has risen over one meter the past years. Roads and houses are being eaten. Most of the beaches are already lost. There are some rumours about a dam being build, to turn the Korinthian Gulf into a lake, destroying the local ecosystems, but saving the coastline. And the coastline so far is absolutely beautiful. Not just the scenery, with mountains rising at the other side of the sea and the blue water where you can look right through. Also the picturesque houses and little boats finish the picture. (Or to quote a friend: “Damn! Were you stalked by National Geographic?”)

Being eaten by the sea.

How long before this tree is swallowed by the raging water?

People are very friendly and many helped me along my way. Though tourism has kicked in here and some people were trying to rip me off (renting me dirty little rooms for the price of a very, very good hotel), but I saw right trough it. And crisis has kicked in as well. Where in Greece hasn’t it? There’s more people begging on the street that I expected (actually I expected almost none outside of Athene) and there’s less trust among people. The first plan I had; to knock on peoples door to ask if I can put my tent in their garden/sleep on their porch, has failed. Around almost all houses are big fences and even bigger dogs. Also, the language barrier turned out to be a minor problem. I can have small conversations with people, but after a few sentences it stops. And my main goal was to talk with people, get to know them, get to know their culture. Luckily some people speak English, even more than I thought, but still not enough to really get to know the Greek people.

The Northern coast of the Peloponnese does have some cool things to see. First there is the Corinth canal, which actually made an island of the Peloponnese instead of a peninsula. I thought the canal would be like the canals we have in Holland, instead it is I-don’t-know-how-many-but-certainly-a-lot meters below the edge. My knees felt very shaky when I had to cross a little bridge to the other side. Second there is the Akrokorinthos. In the fairly flat landscape near Korinthos it is like a big zit (in winters with a white top). A sudden mountain, pretty steep. On top there is an old fortress and an ancient temple for Aphrodite. Third is the epic railroad between Diakopto and Kalavrita. I haven’t taken a train there, yet. I am going to do it tomorrow. But what I’ve found about it so far is really promising. It can actually only turn out to be worse than I expect it to be.

Apart from these highlights, just the coastline is worth a visit already. I particularly liked the part from a few kms before Kiato untill Xylokastro. It’s about 15kms, so you can easily walk it in a day. Just enjoying the views, sitting on a rock, trowing pebbles in the blue water, imagining how life would have been 2500 years ago. Did the coastline look like the one we have now? Probably not. 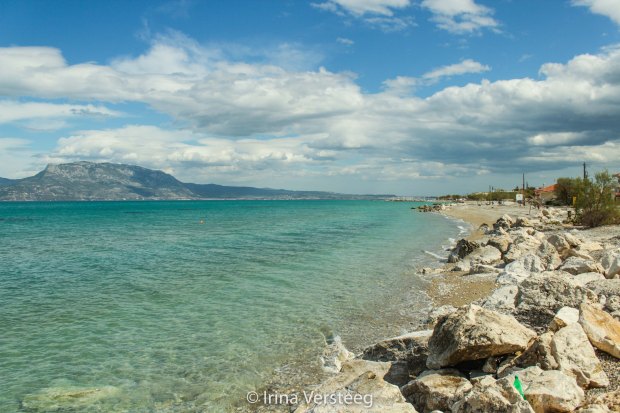