The people of Europe (and beyond). Who are they and what do they do? What keeps them occupied? What do we have in common?

And now the story of Yannis. It is not a story of great happiness. But also not of great sadness. Yannis is a man drawn by life and most recently by the crisis. I met him when I was trying to find my way to Megara and was walking in the wrong direction. He was sitting at a bench near the waterside cleaning his -what I thought looked like- sea cucumbers. He told me to sit down next to him, and when he was finished he would drive me to Megara.

And so I sat with him. 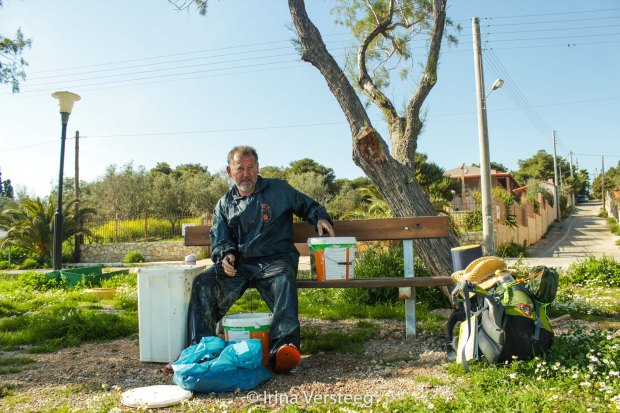 Yannis and his sea cucumbers.

He used to work in construction, but lost his job due to the crisis. Crisis is a word many people in Greece (but I think also everywhere around) think is a very abstract word. And most blame the politicians. Because the people themselves have always been working hard, they do nothing different from a few years prior, only now they are suddenly in “crisis”. They feel the corrupt politicians should pay, and not the innocent hard-working people. But now Yannis is without a job, which means no money and no house. He has a wife and two teenage sons. So he’s catching sea cucumbers to make some money to support his family.

And no matter how little he has, he still wanted to drive me to Megara. (He had to go that way, but still, even if he was going in a different direction I am sure he would have taken me there anyway.) This man, working very hard, his whole life, has some sort of disbelief about everything that happened the past few years. He is not even angry at the people who he thinks caused this all, he is just defeated. And sad. But still a very nice openminded man. Yannis, I wish you all the best.